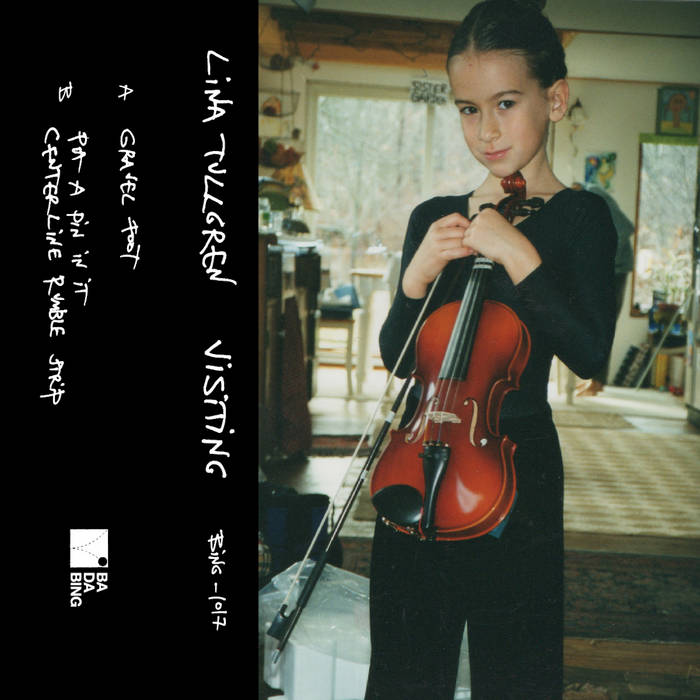 tyler bussey lina slays, powerful and intense and focused music on the edge Favorite track: PUT A PIN IN IT.

For the inaugural release of our new series where artists make music completely unlike anything they’ve previously released, we present Lina Tullgren’s Visiting. Tullgren’s main occupation as singer-songwriter - with two albums released on Captured Tracks - does not set proper expectations for this new release, which is comprised of violin-based drone best suited for Appalachian Deep Listening.

The three longform improvised pieces on Visiting feature Tullgren on their first instrument, picked up at the age of seven, and besotted by tedious hours practicing performance in the rigorous style of classical music. “For a kid, learning violin is a real blow to your self-esteem, because it takes so long to get the instrument to sound good,” Tullgren says. At the age of 13, ,Tullgren’s teacher gave them a different kind of music to sight read, a fiddle tune. Their interest in the piece inspired Lina’s mother to send them where the young teen was fated to go: fiddle camp in rural Maine! For the first time, they felt the communal power of music. Their playing shifted from an attempt to achieve perfection to a “joyful and unrestrained” exploration of tone and timbre, how subtleties of differing approaches affected the entire mood of what they played.

From their teens onward into their twenties, Tullgren’s tastes expanded, leading them to ultimately put down the violin in exchange for guitar. They released two albums on the label Captured Tracks, with songs featuring electric guitar and their wonderfully laconic voice. Meanwhile, Tullgren moved to New York, and started attending free music shows - be it rock, jazz or noise - and began to listen to boundary-pushing artists like Polly Bradfield and Henry Flynt. The singer-songwriter approach started losing its appeal, and Tullgren explored experimental gigs like joining the backup band for Mayo Thompson’s Corky’s Debt To His Father tour. The opportunity to make Visiting came at the perfect time. Plus, a recent Astrology reading informed Lina they are entering a new creative moment directly related to childhood suppression (said Astrologer will be receiving a free copy of Visiting).

Though to some this sonic departure might seem abrupt, Tullgren’s improvisations are full of intentionality: “I have been to a lot of shows where the players seem to be moving through “modes” without a lot of fluidity because they feel like they have to, from harsh to quiet to challenging. It’s cool to be really committed to noise, but I am a sucker for melody. I wanted to take the things I like about harsh sound, apply it to violin, and explore how to keep it balanced with moments of beauty.”

Nobody is better suited to add soul to experimental music than a passionate singer-songwriter like Lina Tullgren. Visiting transcends being a mere exercise and serves as the latest gateway for a musician never content with staying long in any single sonic locale.

Bandcamp Daily  your guide to the world of Bandcamp

New sounds from Mavi, Ivy Sole & Moderator, plus AJ, the One joins the show, for her latest release